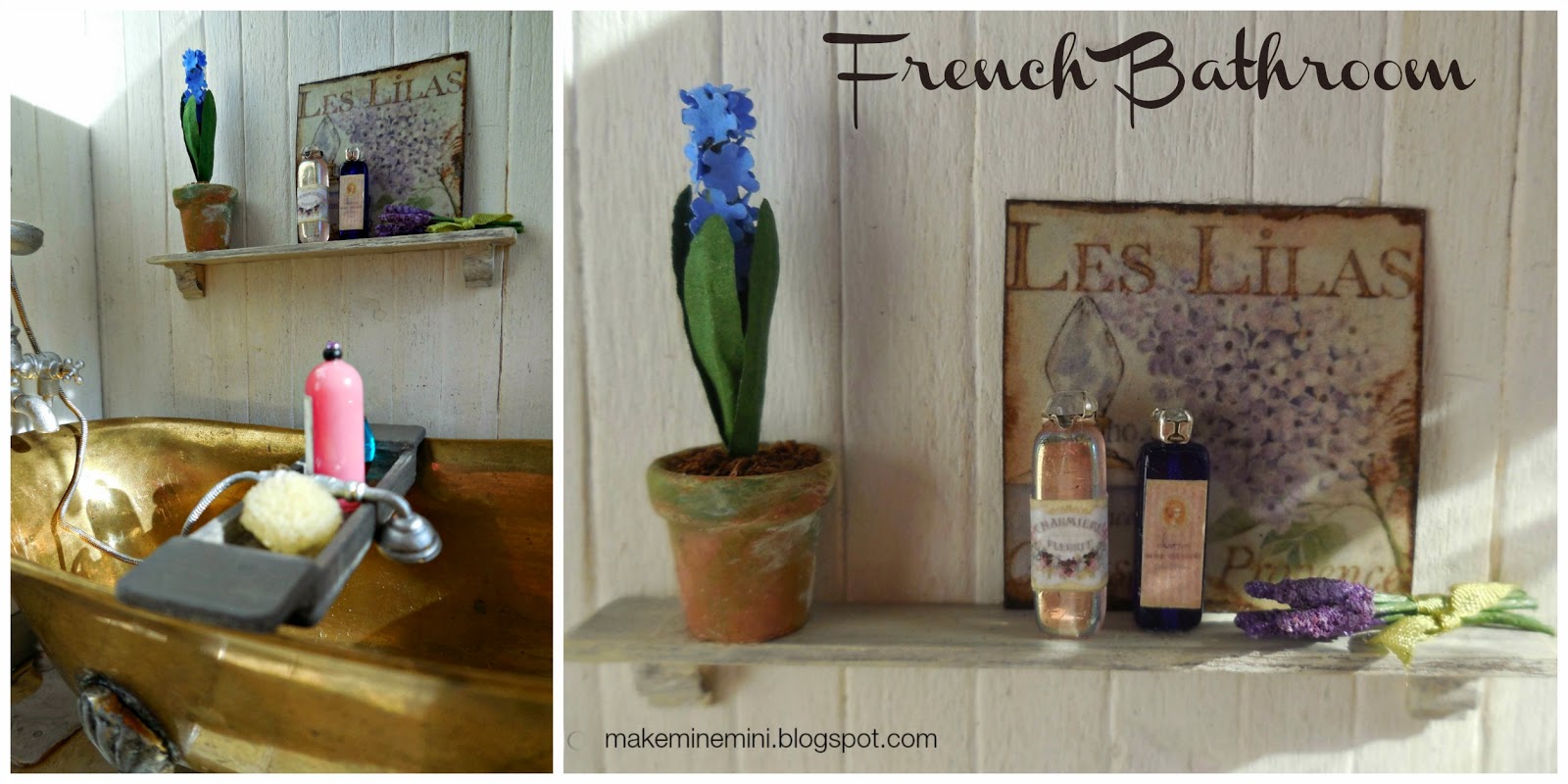 For such a tiny room this bathroom has been a LONG time in the making but I wanted to get the details 'just right'. (Once the adjoining walls are installed it will be a major exercise to access the room to change anything.) With the exception of the sign everything on the shelf came from Synnove almost exactly four years ago, at last they're out of the little box and basking in the rays of the morning sun. The vintage-look  'metal' sign is an image printed on cardstock, edged with dark brown ink to create the rust effect, and covered with several coats of clear nail polish which gives it the look of having an enamel finish (although it doesn't really show up in the photo). 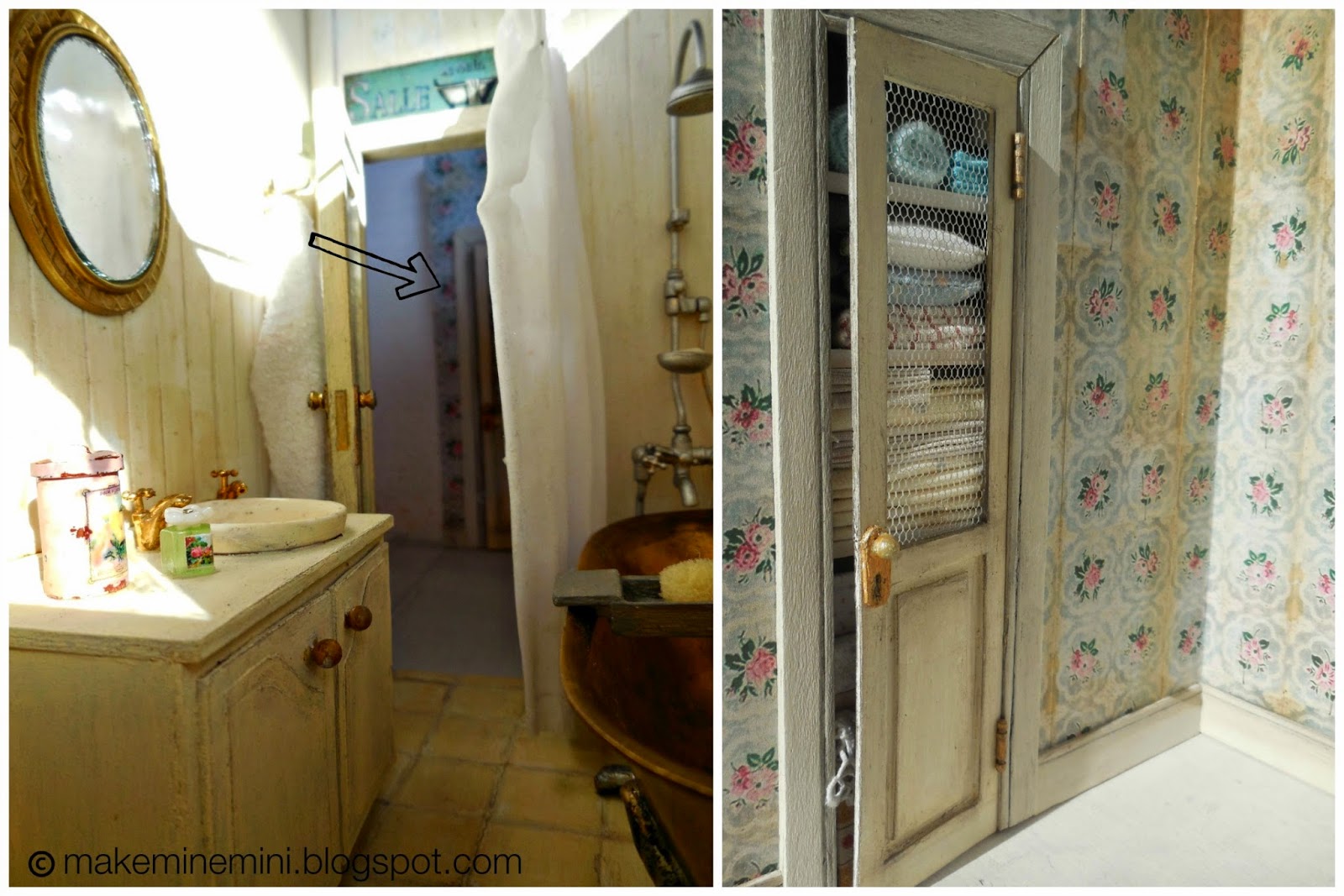 The image on the left shows how the bathroom looks through the window, and if you look through the doorway you can see part of the upper floor hallway. On the far wall you can just see the cupboard. It will be almost entirely hidden from view when the wall that divides the hallway from the bedroom in front of it is put in place. The only possible glimpse will be through the bathroom exactly as you see here. I suppose it could be considered, then, that it was a waste of time doing anything with this cupboard at all but I really wanted to do it properly for my own satisfaction.  It's very shallow (about 1 cm only) but I wanted to try out creating the illusion of proper depth.  I think it's worked fairly well.

I hope you've enjoyed these little peeks, hopefully I can bring you final pictures of both the bathroom and the hallway soon. It'll be such an achievement to have FINALLY completed the back of the house on this upper floor that I think some kind of celebration will be in order!

My French chairs for sale

Add a little French charm to your miniature living room or bedroom.  These 1:12 scale chairs that have been handpainted and upholstered by me are for sale. The upholstery is decorated with charming vintage French aubusson images. The paintwork can be distressed on request if you prefer a more 'faded elegance' look.

The price is $65 for one or $120 for a pair (Australian dollars) plus postage.  For conversion to other currencies click here.

Please note that except for the first two designs below ("Lovers" and "Rose Bouquet") which are both available in a pair I have only 1 of each of the others and it will be some time before there will be any more. 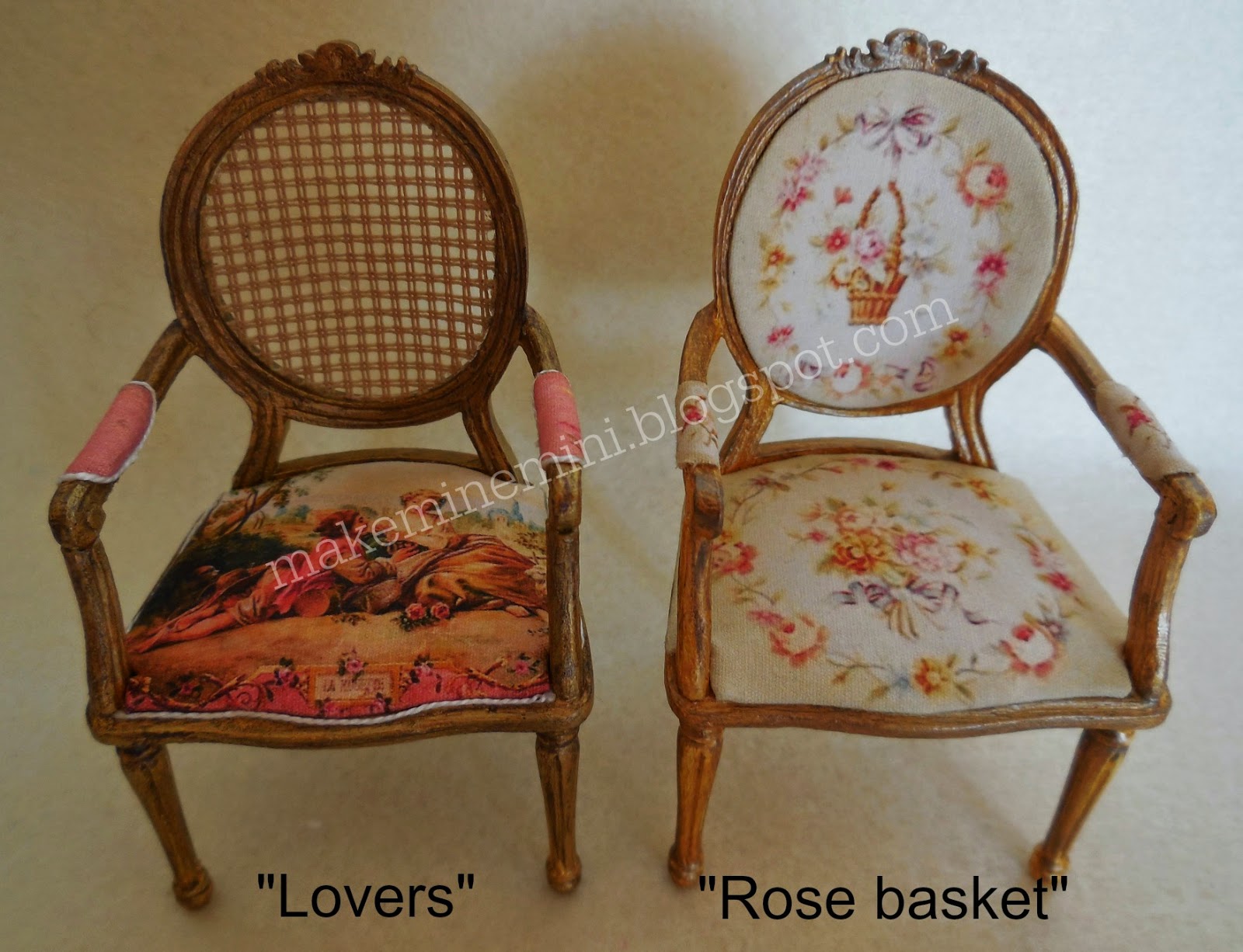 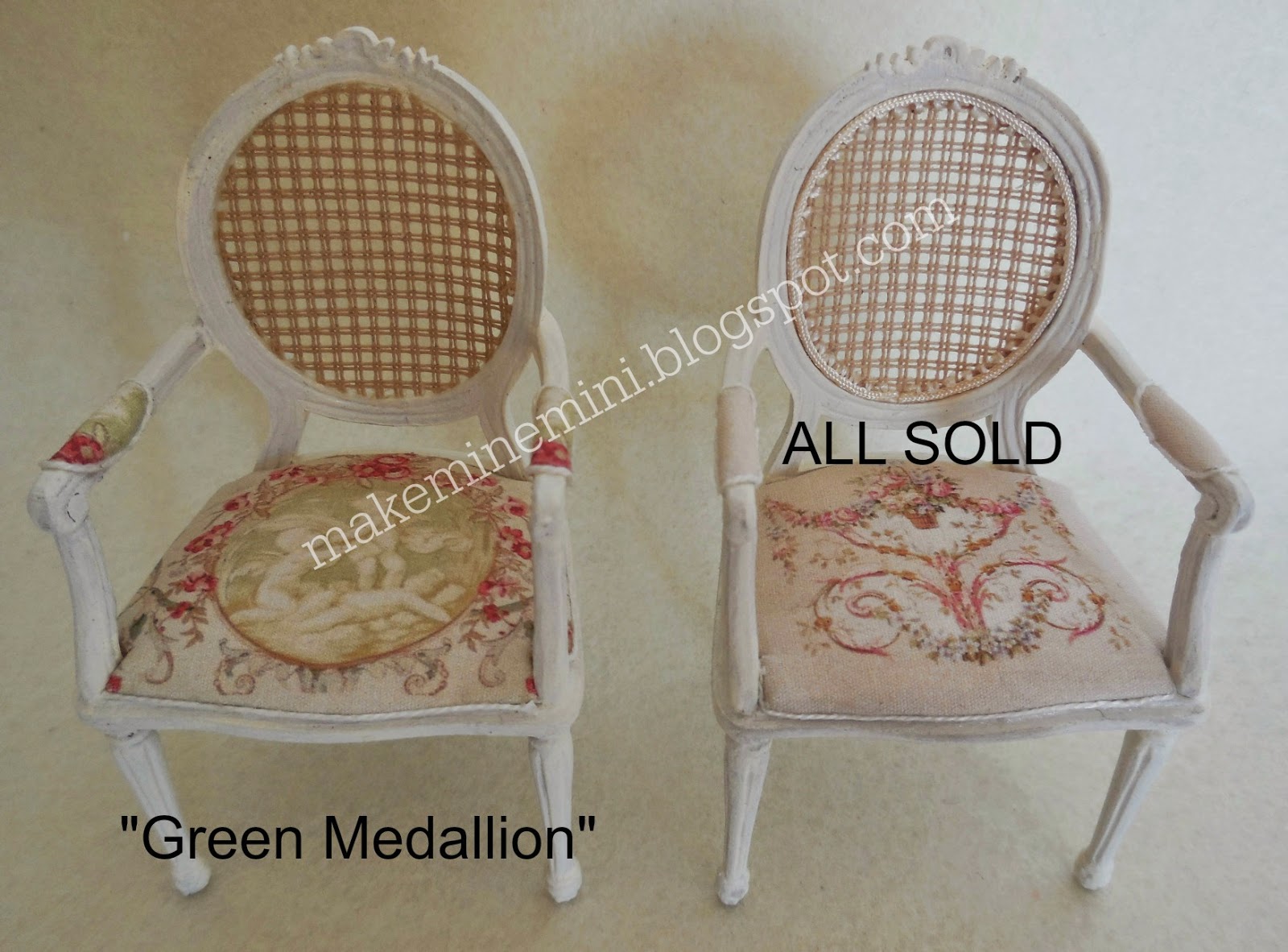 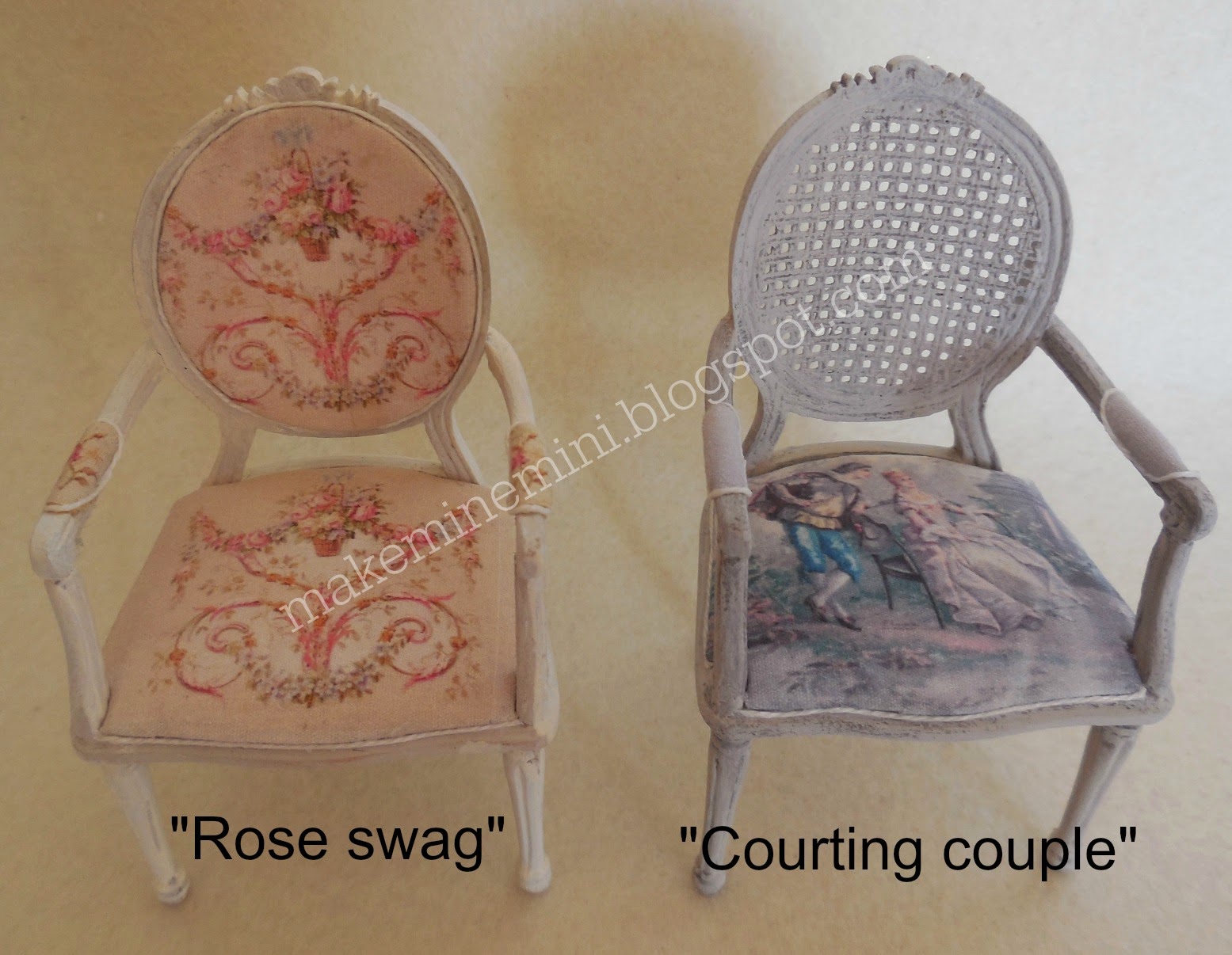 Please email me (normabennett@hotmail.com) if you have any questions or to discuss a purchase.

Sydney Minis Fair is over and I'm still alive ...

... but only just I think - it was fun though and well worth the effort.  I got very little time to look around so the plan to have some photos of interesting exhibits didn't work out, all I've got to share is one very quick shot of my own table (the only photo I took all day!).  I promise to be better organised next time! 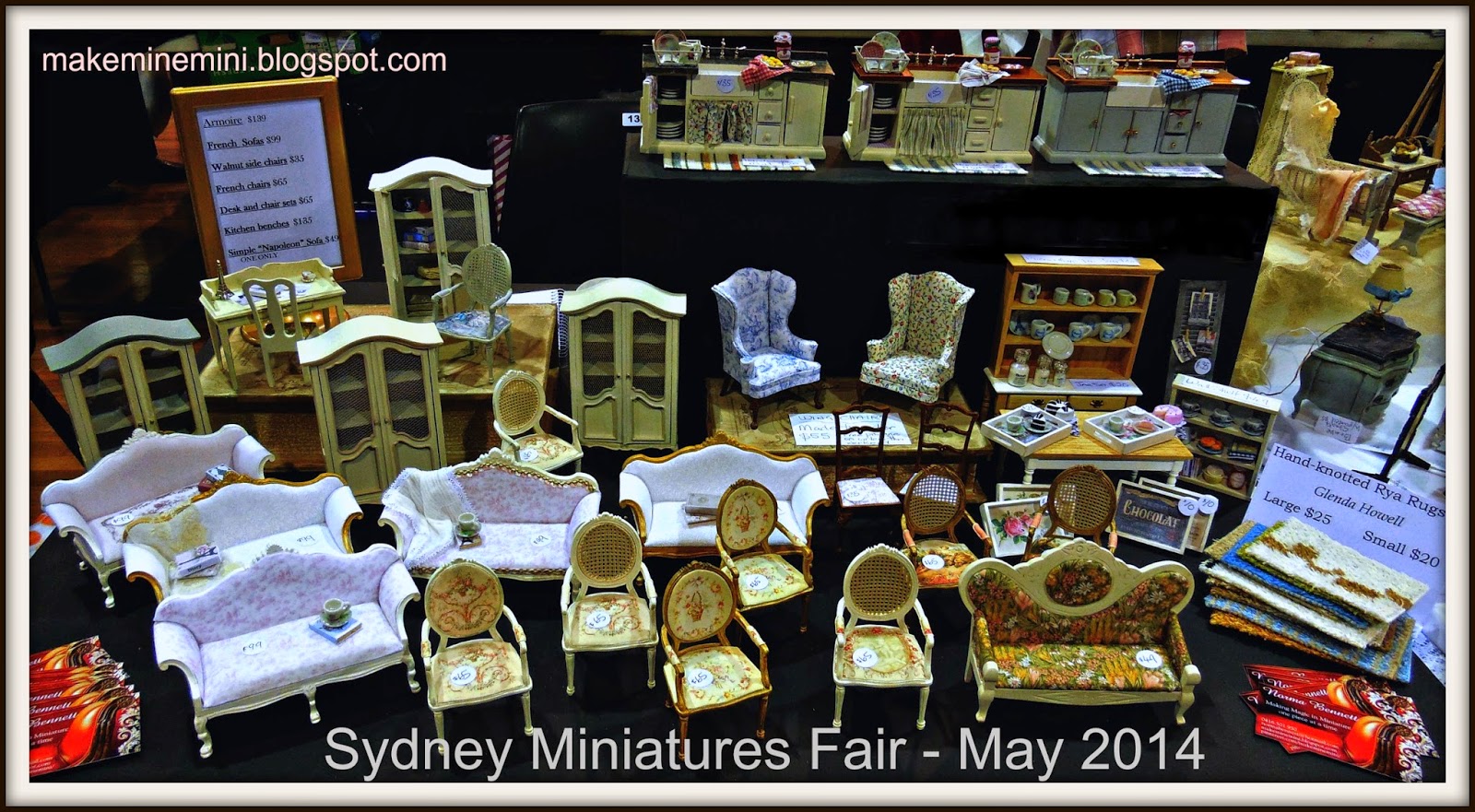 Oh yes, the kitchens! Well the report on those is that I did sell one, to a good friend who wasn't actually looking for a kitchen sink but just had to take one home and now will have to build a kitchen for it, bless her. The others, and various remaining armoire, sofas, chairs, etc will be available to purchase online shortly.  In the meantime feel free to email me if you have any questions.
Posted by Norma Bennett at 3:44 PM 11 comments: