I'm Pinning my heart out!

I SHOULD be making minis, I SHOULD be doing laundry, I SHOULD be packing because we're moving house soon, I SHOULD be cleaning the house, I SHOULD be resting -  BUT I'm playing with Pinterest.
The best that I can say in my defence is that it's research - yes truly it is - so it's a kind of work - I'm saving gorgeous pics that I hope will inspire great minis!  I was ultra excited around 6 this morning because I found EXACTLY the sort of pictures I'd been looking for to show me how real exposed lath looks after old plaster falls off - it's important for a gal to know these things when she's  researching/working on a mini French property that should end up with a look of 'faded elegance' - probably more faded than elegant but that's ok.
I'm having such fun filling my Pinterest albums with inspiring images, it works so much better than saving to a computer file.  One of the features I like best is that the source URL is saved with the image so there's no problem with knowing where it came from - which can be very important sometimes.  And it's fun looking at the albums of other people who share similar tastes and interests.
Click here to visit my Pinterest page, click on a board to see all the images in that category in a larger size.  Maybe there's something there that will inspire YOU!  I hope so.
Do you have a Pinterest album??  If so please let me know in a comment - I'd like to come and take a look.

Have I lost my mind? (This post now has an unfortunate postscript) 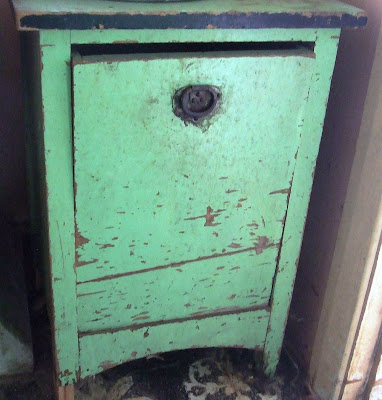 This isn't a mini, it's a "standard human size" old, battered cabinet with a bin. Clearly it's seen better days but I love it. It was rescued from the workshop of an old house that my cousin has just bought. She was with me when I bought the old sideboard (below) that is now in the New Zealand cottage bathroom after some repair and painting so she knew that it would appeal to me.

I won't be painting the old green cabinet though, it's great just as it is, well I think so anyway although there are others, perhaps saner than I, who do not agree.
The green cabinet isn't the only thing she rescued from the old house - she just managed to get this old chest of drawers out of the clutches of her husband who was going to chop it up for firewood! 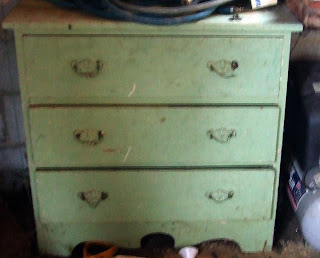 There will definitely be some 'upcycling' work to do here - for a start only two of the handles are intact, but it's generally in good condition (look at the beautifully shaped kickboard!) and it looks to be just the right size for the cottage upstairs bedroom, perhaps replacing the bookshelf in the corner... 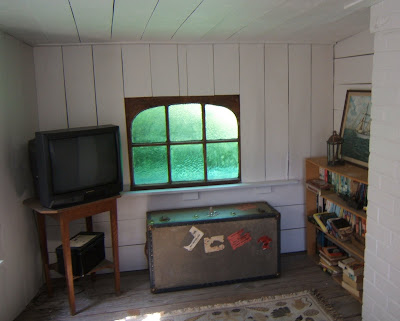 Thank you Dot for coming to the rescue and saving these beauties for your perhaps slightly insane cousin :)  I won't get to see them 'in the flesh' until our summer visit which is some months away - I hope she can keep Trevor and his axe away from them until then!!
Postscript 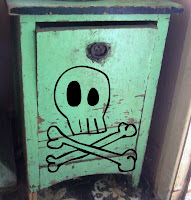 I just heard that the old bin is no more :(
It disintegrated when it was moved so my love affair with it has been somewhat shortlived.  It wasn't in the dry workshop with the chest of drawers but in a laundry and had been damaged by the damp, unfortunately that didn't become apparent until they went to move it.  Oh well, it is the demise of many of these old pieces that makes the ones that survive all the more valuable - there must be another one out there somewhere...
Posted by Norma Bennett at 12:01 PM 16 comments:

I had a great time during my recent visit to New Zealand to celebrate my brother's birthday, it's not often that he and my sister and I get together as we live far from each other - they live pretty much at opposite ends of New Zealand while I'm on the other side of the Tasman Sea here in Sydney. Being able to meet up with some special New Zealand miniaturists as well was a real bonus. 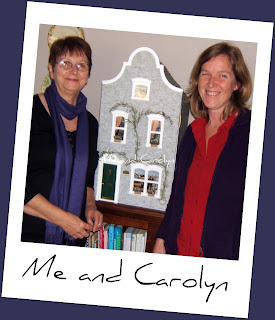 When I discovered that Carolyn (Carolyn's Little Kitchen) lives not far from my brother visiting her was a definite 'must do' during my trip.  We had a great afternoon together, the time went much too fast - and what a surprise it was to discover that we both love purple, as you can see by my scarf and her cardigan - it may look black on your screen but trust me, it's definitely purple!  It was a delight to see her original dollhouse (the Canal house in the picture) and the shabby cottage that I've watched come together room by room through her blog.
Carolyn had some lovely surprises for me
﻿﻿﻿ ﻿﻿﻿
﻿﻿﻿
﻿﻿As well as her Etsy store Carolyn also has an online minis store - well, actually at the moment it's offline because it was brought down by a hacker some months ago :(  I fell in love with the French slippers from The Dolls Cobbler that  Carolyn showed on her blog a little while ago and fortunately she had some on hand so how could I resist buying these beautiful little real leather shoes....... 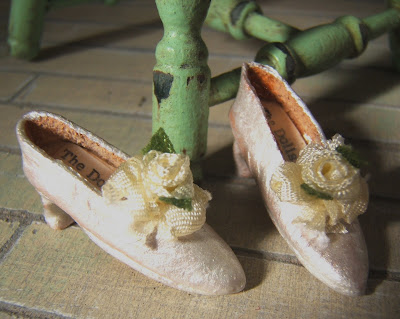 My next big treat was spending several hours with Mercedes (Liberty Biberty) in Auckland when I transited through on my way back to Sydney.  To my great delight Mercedes invited Frederica (Frederica's Little World) to join us for lunch.  Enjoying a delicious lunch with Mercedes and her family (including cute as a button and very funny Liberty of course!) and Frederica was the perfect end to my New Zealand visit. Here we are in the Auckland sunshine in Mercedes' front yard 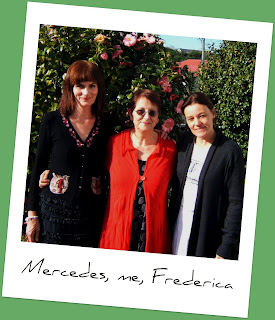 It was great was to have plenty of time to enjoy looking at Mercedes' fabulous projects: the barn, the shabby cottage, the Nylon's big house - and how exciting to meet Mr Nylon as he relaxed on his front porch!
How lucky I was to receive these pretty gifts from Mercedes 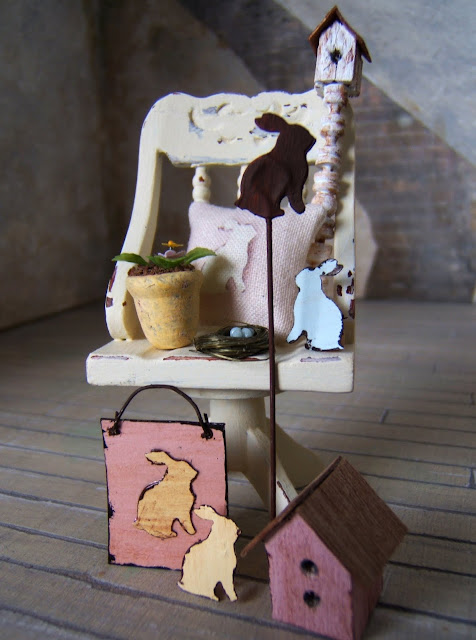 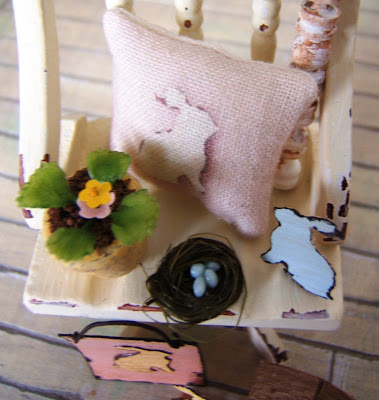 These pretty little children's jackets by Frederica are just delightful - and they're mine! 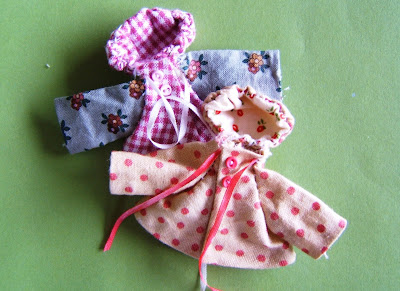 Such lovely things from such talented and generous women.
It was a pleasure and a privilege to have Carolyn and Mercedes welcome me into their homes, and to have Frederica take the time to visit.  I never imagined that my decision to start this little blog some 18 months ago would lead to friendships with such warm hearted and talented women as these.
Thanks again girls!!!

Click
here to visit Carolyn at "Carolyn's Little Kitchen"
here for Mercedes at "Liberty Biberty"
and here for Frederica at "Frederica's Little World"
Posted by Norma Bennett at 4:08 PM 21 comments:

A lot of the time I spent working on my friend  Rowan's blog last week (see previous post) was playing around with her images on the online photo editing website Picnik - if you haven't seen it before take a look and try it out - there are a heaps of free features or you can pay for Premium access.  There's a lot you can do with the free ones and it's REALLY user friendly.
And it won't take the time it took me unless you too are afflicted with "perfectionitis" - here are some of the 'draft' versions of the image used on Rowan's Mexican Chowder post  (using the Polaroid framing feature)

made before I decided to go totally in the opposite direction with the density of the background colour - this is the published one ... 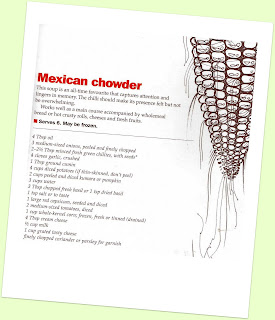 If you haven't tried it yet pack up a few favourite images and take a Picnik this weekend - it's a lot of fun!!
Posted by Norma Bennett at 8:29 PM 3 comments:

I have blogged myself silly this week - but not for me!

Since arriving back from New Zealand last Sunday night I've spent many hours "ghost" blogging for a Foodwriter friend I'm helping out with her brand new blog.  She is my oldest friend and a very intelligent and accomplished woman but put her in front of a computer and she'll be the first to admit that all her powers mysteriously desert her.  Having been the one who bullied talked her into starting a blog about her food and travel adventures (currently several weeks in France and Italy) it seemed only fair that I help her out when she found herself faced with all kinds of problems including having the Dashboard language change to French (I don't know if she's got it back to English yet but last I heard she was thinking of throwing her laptop out of the window of her gite).   Anyway, because it's a brand new blog I have had the feeling that I've been pretty much talking to myself all week so if you'd like to join the conversation pay 'us' a visit at her blog "Rowan Bishop Foodwriter" - a word or two would give both of us a great deal of comfort and encouragement! :)
By the way I certainly can't take all the credit for how the blog looks.  The basic Blogger template was styled (brought to life!) by my talented daughter-in-law Lamina who created the header and co-ordinated the fonts and colours with the cover of Rowan's new cookbook.  It's been a wonderful foundation to build on and I've appreciated having her to run ideas by this week.
All that blogging elsewhere has left me with a brain that is now about as much use as a fried computer chip so I must apologise - I'd fully intended to blog today about my recent visits with Carolyn, Mercedes and Frederica but it'll have to be next week ... sorry about that because I know you want to hear all about it, and I want to show you the gorgeous little gifts these generous women gave me, but please bear with me - I'll get to it as soon as my circuits recover :)
To visit Rowan's blog click here, and here to visit Lamina
Photo of Rowan in her kitchen by Chris Hillock, Photographer  published courtesy of Foodtown Magazine
Posted by Norma Bennett at 4:01 PM 4 comments: